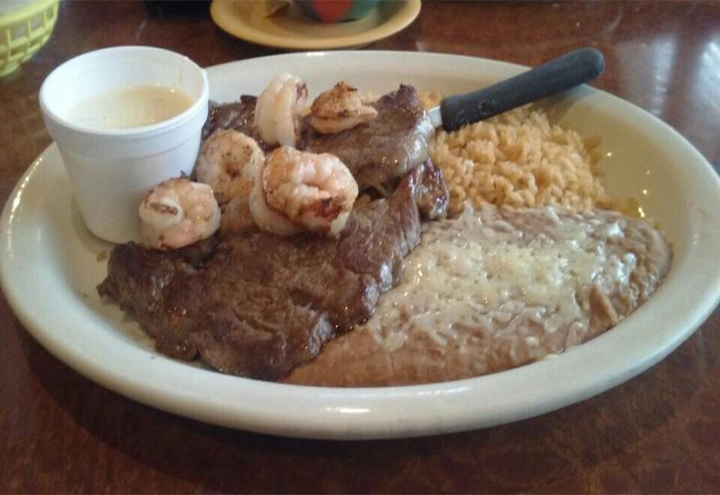 Come in and see why we are a local favorite and why our regulars keep coming back time and time again!
Mexican/Southwestern
- $$

If you do not order from the menu, each basket of chips will cost $1.50

$3.99
"True taste of Mexico!" Mexican cheese, mayonnaise and salsa Valentina over a bed of well-grilled corn

$10.99
Grilled shrimp with onions, sliced jalapeños, and tomatoes served on a bed of lettuce and cheese decorated with avocado slices

$7.99
Tender strips of marinated chicken or beef on a bed of nachos topped with cheese, sour cream and guacamole. Chicken or Beef

$7.99
A bed of nachos topped with lettuce, sour cream, tomatoes and shrimp

$6.99
Tomatoes, cheese and grilled chicken breast on a bed of lettuce

Choice of beef or chicken with lettuce, sour cream and tomatoes
$6.25
With Shrimp $7.99

$7.99
Grilled chicken on a bed of lettuce, topped with sour cream, tomatoes and light cheese

$11.99
Sliced chicken breast prepared with fresh-sliced mushrooms, onions and poblano pepper on a bed of Mexican rice with jack cheese. Served with salad

$12.99
Large shrimp grilled with garlic and onions. Served on a bed of rice, accompanied with a salad

$12.99
Covered in a very spicy sauce, delectable shrimp lay on a bed of steamy rice served with a salad

$12.99
Shrimp cooked with onions, tomatoes and jalapeños. Served with Spanish salad and rice

$11.99
Deep-fried flour tortilla filled with shrimp, topped with cheese dip, lettuce tomato and guacamole. Served with a side of beans

$11.99
Tilapia prepared in our special garlic marinade. Served on a bed of rice with Spanish salad

$15.99
Grilled fish and shrimp cooked with onions, spicy jalapeños and tomatoes. Served on a bed of rice accompanied with a Spanish salad

$12.99
Sautéed shrimp in butter with fresh-sliced onions, mushrooms and poblano peppers. Served on a bed of rice with jack cheese and smothered with our special sauce

$8. All combinations are served with rice or beans. Vegetarian available. Make it Supreme (lettuce, sour cream, and tomatoes) add $1.45. You may substitute a soft taco add $0.50. Substitute salsa for cheese sauce add $1.25. No substitution in any other order. Shredded chicken is cooked with bell peppers, onions, and tomatoes. Ground Beef cooked with tomatoes and onions. Choice of any two:

Seasoned corn tortilla filled with your choice of meat, cheese or beans, topped with enchilada sauce and shredded cheese

Main dish consists of carnitas, shrimp, chicken, beef and Mexican sausage cooked with tomatoes, onions, mushrooms, and peppers
For One $12.95
For Two $21.99

$8.99
2 flour tortillas filled with cheese and grilled chicken or beef. Served with a small guacamole and sour cream salad

$7.95
Two burritos combined, one chicken with beans and one beef with beans. Topped with sour cream, salad and traditional red sauce

$7.99
Two burritos stuffed with chopped beef and topped with a traditional green sauce. Served with rice and guacamole salad

$12.99
Marinated grilled ribeye served with rice, beans and nopal with a choice of soup or salad

$13.99
10oz marinated and grilled ribeye and shrimp served with rice and beans. Topped with cheese sauce

$10.25
Chunks of pork in a traditional green sauce. Served with rice, beans and corn or flour tortillas

$7.95
Three tacos with pork tips served with pico de gallo, rice or beans and choice of soft or hard shell

$6.99
Corn tortillas cooked with chicken, grilled onions and our own special red or green sauce. Topped with cheese and served with rice and guacamole salad

$7.99
Two soft or deep-fried flour tortillas filled with chicken and topped with grated cheese and sour cream. Served with rice

$6.99
One chicken burrito and one chicken enchilada topped with cheese sauce and sour cream salad

$6.45
A flour tortilla deep-fried and filled with chicken and beans. Topped with nacho cheese and guacamole salad

$7.25
Four enchiladas, one chicken, one bean, one beef and one cheese. Served with lettuce, tomatoes, sour cream, and ranchero sauce

$7.99
Eggs scrambled with Mexican sausage and served with rice, beans and tortillas

$7.75
One chicken flauta and one beef taco topped with cheese sauce, one chalupa texana and rice

$9.99
Three sopes made with corn topped with beans, and your choice of beef, chicken, pork or chorizo. Served with cabbage, avocado, tomatoes, Mexican cheese and hot sauce

3 For $9.99. Choice of hard or soft tortillas. Choice of rice and beans. And choice of cilantro and onions or lettuce and cheese

Perfect Choice!
You're almost ready to dine.
You can browse to see what restaurants and retailers are in your area, but you must login or create an account to use your Dining Discount Pass code.

You're on your way to big savings...

Once you have your Dining Discount Pass, please take note of your code and make sure to follow these steps:

Once you have your Dining Discount Pass, please take note of your code and make sure to follow these steps:


You can browse to see what restaurants and retailers are in your area, but you must login or create an account to use your Dining Discount Pass code. CLOSE
Sorry, this account doesn't have any unused credit available.
Search for a restaurant deal
Oops! This code is invalid.

Please re-enter to check for accuracy.
Or sign-in and choose available credit from your account.

Please re-enter to check for accuracy.
Or sign-in and choose available credit from your account.